A guest blog by Emma Briggs

Here I am in a small hotel in the Pyrenees, waiting again for my man to ride his bicycle up and down some mountain. Last time I drove up to meet him at the top, but I decided to skip that adventure today. Driving up narrow, winding roads on the wrong side of the road is terrifying enough without having to avoid hundreds of cyclists, motorbikes, cars and the occasional bus. 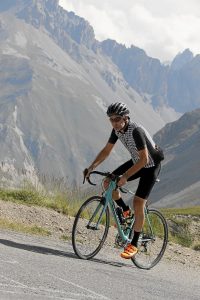 He said I could write this if I included this picture

Every morning that he is able, he pulls on his shining lycra armour, his orange tap shoes, helmet and special fly-eyes sunglasses, programs his Garmin and sets off in search of hills to climb, the steeper the better. He is opposed to flat roads. Unfortunately for him, we spend a lot of time in the Netherlands, so when we’re on holidays we often seem to end up in extremely mountainous terrain. 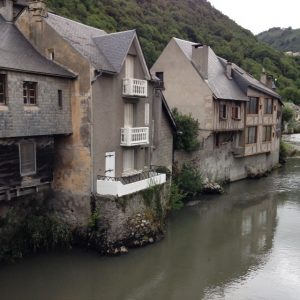 It doesn’t matter if it’s raining, baking hot, freezing cold or if he has a hangover. He must push himself and his two wheels to a summit somewhere.

I don’t know why.

It would be nice to spend more mornings in bed, waking up slowly together, but the upside is that we are seeing some beautiful places. 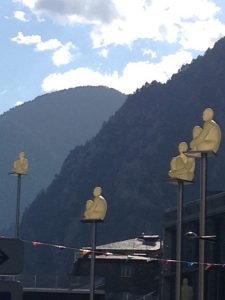 Usually by lunchtime he descends from the clouds, sweaty and quivering with excitement to upload his ride on Strava. For fellow layabouts unfamiliar with this system, it is a way for obsessive sporty types to boast about their efforts online. These days, there is actually no point in performing any physical exercise unless it can be reported and “liked” by those with similar fetishes. If it’s not on Strava (or Facebook, at the very least) it never happened.

I cannot say I understand the desire to pedal for hours up cold, dangerous inclines with exploding lungs and burning legs, although I suppose coming down would be okay. Personally I’d prefer a good night’s sleep. Cycling is equally as expensive, energy-draining and time-consuming as any other addiction, but it’s probably more healthy than most and it seems to make him happy, so I guess I’ll have to accept my role as support driver for now.

Anyway, due to Velominati Rule # 11 (family does not come first. The bike does), it seems I don’t have much choice.

Further assorted insights from my support driver can be found here: https://medium.com/@emmabriggs.